Today I want to say that my trilogy, The Roxanne Fosch Files is finally done. All three books + a short novella has been written, and the final chapter in Roxanne’s story told. It’s sad and exhilarating at once.

Below is a brief excerpt – that I feel fits perfectly with the current event around the globe – I edited out some of the spoilers to make this excerpt as spoiler-free as possible, but  maybe parts of it would spoil something from book 2.

Note: I’ll be looking for some reviews to help launch the book. If you’d like a copy for review purposes, contact me at jina.salameh1@gmail.com If you would like to help in some way, let me know, we can work something out. 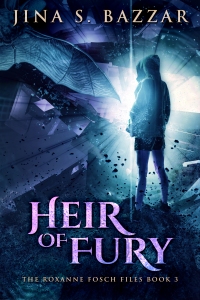 High up on the observatory deck of the Empire State, I leaned against the railing and watched the city. The fierce wind stung my eyes, whipped my hair free, and ruffled my wings. I spread them wider, leaned harder against the rail. From up here, I couldn’t make the sound of the traffic below, or smell the traffic plume. There was nothing but the sound of the wind beating at me from all sides, choking me with fresh air.

For a long time, I stood and watched the blinking lights, hoping to mute my thoughts–and failing. Dawn would come soon. And for all that happened during these past days, Dorka, Wallace and Brooks; Vicky; Zantry and me; Roland’s break down; Dathana… one thing kept coming back to haunt me: Remo was ready to move. “Time’s drawn near, Poppet. Everything is set into motion. The portal is too active, my kin are impatient. Get those vessels to me.” His words played in my head over and over, like the lyric to a song that wouldn’t go away. I’d known he was getting close to achieving his goal, but God. I placed a hand over my jittery stomach, over that cold, roiling mess. What had I done?

From the observatory deck of the Empire State, I could almost see it, the end as it may come. Just the lights and the wind left, the clouds and the night. And then I looked down, at all the miniature life still coming and going, focused at those tiny lights blinking on and off in distant windows. And I wondered, not for the first time, what would happen to all the noise, all the people, all those lights, once Remo made his final move? Would a war ensue, destroy everyone and everything? Would the fact the world was unprepared for Remo result in minimal opposition?

I had never, in my wildest dreams considered I’d be well and alive when the end of the world came. I always assumed it’d happen in a far, far away future, at a time my bones were nothing but old dust. I never had reason to fear it, because I was certain I’d never be there.

But here I was, at the cusp of the end, helping the world to break.

I wondered, had things happened differently, would someone, some preternatural group, have found a way to get rid of Remo before he could have gotten this far?

I was the trigger in Remo’s coup, the big surprise at the end of his game. I should have let the guardians of the leeway kill me that first time. My death would have put so many holes in Remo’s plan, eventually, it’d have broken apart, or he’d have to adjust–and add decades, if not centuries, to achieve it. So many times I’d come near death, so many times all I needed was to give up. Hell, if I died now, I’d be giving a fighting chance to those trying to stop him. So why not help everyone? Did I know how to give up? Death, for me, had never been a choice to make, but an enemy to fight. But was my life, after all I’d done, and compared to all that was to come, something worth fighting for?

This site uses Akismet to reduce spam. Learn how your comment data is processed.